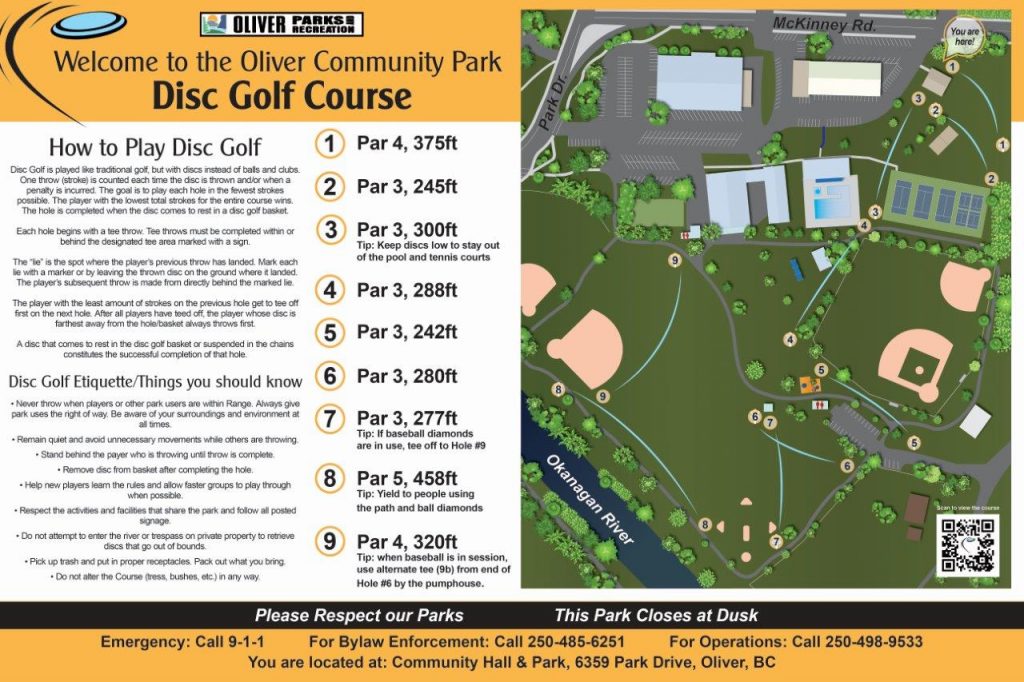 How to Play Disc Golf

Disc Golf is played like traditional golf, but with discs instead of balls and clubs. One throw (stroke) is counted each time the disc is thrown and/or when a penalty is incurred. The goal is to play each hole in the fewest strokes possible. The player with the lowest total strokes for the entire course wins. The hole is completed when the disc comes to rest in a disc golf basket.

Each hole begins with a tee throw. Tee throws must be completed within or behind the designated tee area marked with a sign.

The “lie” is the spot where the player’s previous throw has landed. Mark each lie with a marker or by leaving the thrown disc on the ground where it landed. The player’s subsequent throw is made from directly behind the marked lie.

The player with the least amount of strokes on the previous hole get to tee off first on the next hole. After all players have teed off, the player whose disc is farthest away from the hole/basket always throws first.

A disc that comes to rest in the disc golf basket or suspended in the chains constitutes the successful completion of that hole.

Disc Golf Etiquette/Things you should know

• Never throw when players or other park users are within Range. Always give park uses the right of way. Be aware of your surroundings and environment at all times.

• Remain quiet and avoid unnecessary movements while others are throwing.

• Stand behind the payer who is throwing until throw is complete.

• Remove disc from basket after completing the hole.

• Help new players learn the rules and allow faster groups to play through when possible.

• Do not attempt to enter the river or trespass on private property to retrieve discs that go out of bounds.

• Pick up trash and put in proper receptacles. Pack out what you bring.