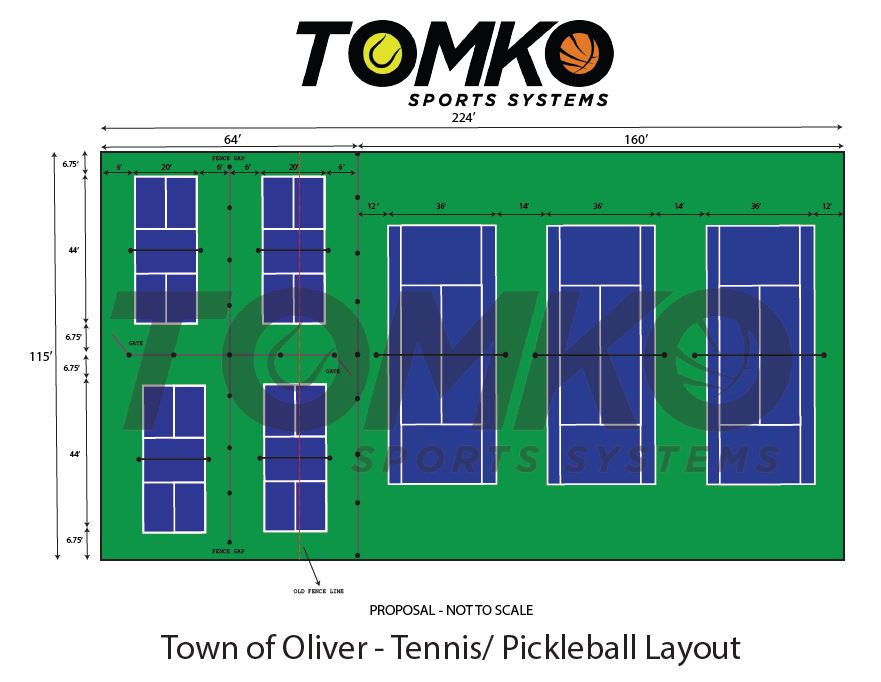 Oliver’s only racquet sport courts (circa early 1990’s), a three-court outdoor facility designed for tennis but currently shared between tennis and Pickleball players, will be getting a much-needed facelift as well as an expansion with the Sport Court Development project starting this week in Oliver Community Park.

The Oliver Sport Court Development project will add a new asphalt surface area at the east end of the current tennis courts by “hospital hill” to house 4 new Pickleball courts, repair and resurface the existing tennis courts, install new perimeter fencing and gates and new equipment including net posts, nets and court dividers.   The desired outcome of the project is to increase available court space, improve safety, and encourage more people of all ages to be outside and active. This project will also increase opportunities for the social participation and inclusion of seniors and low-income members of our community.

The Sport Court Development project is part of the approved 2022 Oliver Parks and Recreation capital financial plan to ensure all costs to expand and resurface the courts are met.  Oliver Parks and Recreation was successful in their application to the Canada Healthy Communities Initiative program (CHCI) for funding in the amount of $42,567 for the Oliver Sport Court Development project.  A committed group of court users led by local resident and sports enthusiast Janet Shaw formed a fundraising committee in the early stages of the project.  Through a sponsorship banner drive and personal donations, the funds raised to date by the community total just under $40,000. The total cost of the project is estimated at $140,000.

The Oliver Parks and Recreation Society is acting as general contractor and has contracted the services of Rock Glen Geotechnical Consulting, MACKINLEY-CLARK Paving, OK Vinyl Fencing and TOMKO Sports to complete the various components of the project.

The anticipated timeline for the project is as follows:

The court facility will be closed from Sunday April 4 until project completion which is estimated for early-to-mid June.  Oliver Parks and Recreation is asking for patience from all court users to refrain from entering the facility during this period of time to ensure safety and that the job is done well.  The half-court basketball court and net adjacent to the courts will be permanently removed to allow for the Pickleball court expansion.  While there are several outdoor basketball nets in Oliver at the elementary and secondary schools, Recreation staff are committed to investigating the feasibility of a future basketball court location in Community Park.

There will be a ribbon cutting and recognition event held in early June 2022 to celebrate the completion of the project.